Year-in-Review bridge: A little (long) story and a gift 🎁

Hearing the impulse and following the call

I originally intended to write a single Year-in-Review post, but as I started writing it I realised 2022 was too rich to be summarized in a single post. So I settled on having 2 parts to the Year-in-Review. Then some unexpected events unfolded, which led me to take inspired action and write the post below, originally written as a newsletter to my mailing list, then shared on Facebook, was created.
Kind words have come to me expressing how inspiring and beautiful the story is, and I didn’t want it to be lost in time, so here I’ve attached it as a bridge between part 1 of the Year-in-Review post, and part 2, which is still being written, just as Humanity is the bridge between Heaven and Earth, a little like the ‘-‘ between Yin-Yang.
For me, this messy post that cuts across different moments is also a reminder of how, often in life, progress, and time isn’t linear, and of the cyclical nature of things. I hope you enjoy this story.
=================================

TWO WAYS OF BEING

Before embarking on the journey to walk my own path, I had been taught and conditioned to believe that I should know my end destination or goal, and to ‘start with the end in mind’ – so I can work backwards to know the path I should take and how much I should journey each day, week and month to get there.
Since I started walking my own path, I have become more and more convinced there is another way, a more magical way of living and being, encapsulated in the saying, ‘Da cosa, nasce cosa’ as they say here in Italy, meaning ‘One thing leads to another’, which describes my life right now.

BEING TOUCHED BY LIFE

More than 2 years ago I discovered a pdf of an interview transcript, called ‘Moving into Stillness’, by Dr Jim Dreaver with founder of Freedom Yoga, Erich Schiffmann/Freedom Style Yoga | Erich Schiffmann’s Big Mind Online, which I printed out, read and highlighted.
The pdf is now long lost, but in times when I felt disconnected, disillusioned or discouraged, I kept returning to that crumpled transcript (which is still in my backpack today), finding much-needed reminders, comfort and insights through Erich’s words to keep going on my path. 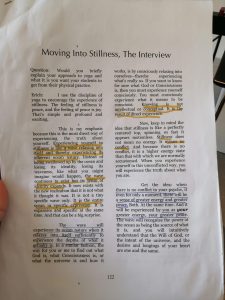 On Jan 30 this year, while on my morning walk I felt a strong compulsion to write Erich online (who I did not know personally) to ask for his permission to share the insights from his interview with others. I hadn’t any clear idea how it would be done, simply a strong feeling that this gem was too precious not to be widely and freely shared with the world, I had to do it.
Later on I would find the vocabulary to describe what I had felt and done, but at the time I felt scared, excited and vulnerable all at once. To my surprise and joy Erich responded positively to me, giving me full permission to share his work in my own creative ways.

I set out to, in my typical, structured manner, to summarize and order the key insights of the interview in a logical fashion, a vocational strength & hazard from 7 years of working in research & analysis. The final output was orderly, logical and insightful, but didn’t feel right. I paused, and returned to the heart of the calling, remembering the intimate feeling of reading the interview, and the moments when reading it I was brought to tears. I wasn’t doing it justice, it wasn’t right.
What would be the right way?
What would be the right words, sounds, so on?
When would be the right time?
I wished to share the same intimacy, joy and connection I felt when reading the interview with the world, but didn’t quite know how. I started to weave the words into a meditation, with the intention of sharing it eventually on Insight Timer, a free meditation app, so that anyone would have access to it freely as I had with the interview, but hit some creative blocks.

ALLOWING AND BEING PATIENT

My workload from other projects started piling up while I struggled to work on this project. I knew I could rush to ‘finish’ it, but I didn’t do this to pay the bills – it was something precious, close to me. Too dear to be rushed. And though it was difficult, knowing this helped me stay patient, and I lay fallow, letting the unfinished stray words stay.
I started to name my InsightTimer livestream sessions ‘Moving into stillness’ to remind myself of what it was I was practising and teaching, and to stay connected this intimacy & connection with life.
At the same time I explored other ways to share Erich’s words. As part of the InsightTimer mentors group I envisioned and proposed a mindfulness summit that would bring together all our strengths and expertise to support people around the world. I invited Erich, hoping more people would discover him and know of his teachings but he declined, being on indefinite sabbatical and busy with writing. Eventually the Summit was put on hold by InsightTimer (and later eventually scraped) due to a shift in direction favouring on-demand offerings, leaving me feeling slightly defeated.
In summer, while on vacation near the sea in Crete I tried recording the meditation to the sounds of the ocean waves, but hit blocks again – some recordings were faulty, or the sounds felt intrusive, or I sounded too robotic. Again, a sign it was not ripe.
Again, I let it go.

I believe there is a right time and place for everything.
More than 3 months after InsightTimer‘s non-response to the possibility to host a group Summit and I had lost hope of a group collaboration, Yoga Nidra & meditation teacher Julie – Yogaressa asked the status of the summit, and Reiki master Keziah Gibbons suggested to follow up idea of the summit again, on our own, without InsightTimer‘s support. Thanks to Keziah, and the support of other mentors Insight Coach Ipek Williamson, and later on Tom Evans, Femke Bakker, Reuben Lowe, and other mentors, the Inner growth Summit Stepping into Possibilities 7-8 Jan 2023 was created. 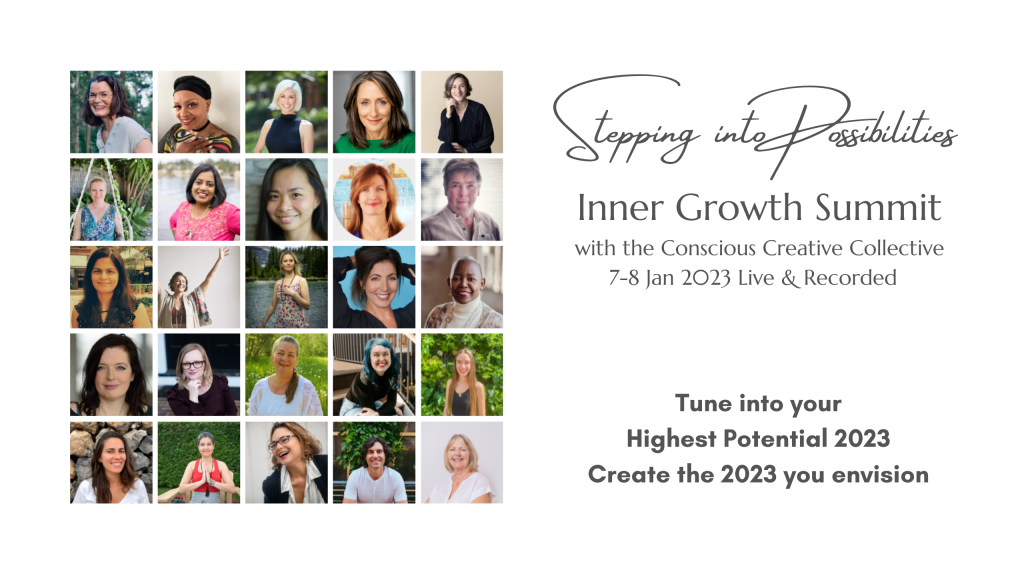 More important than that, something beyond my wildest dreams had manifested: the Creative Conscious Collective (a wish I had written down in 2020: ‘I really want to create a conscious community’), a group of kind, supportive, collaborative, creative and wise teachers, entrepreneurs, mentors and leaders, driven by their common desire to be in service to the world, was born.
Something that could not have been achieved by me efforts alone.
Last week, as I was sharing about Stepping into Possibilities on social media, and of all people on Facebook, Erich was the first to like the post, and I was reminded of the unfinished words I was due to return to. Immediately I felt, despite not having a hard deadline, I knew the time was right and I had to take action fast. Within the day the meditation started to take shape through this newfound inspiration and connection I felt with myself and the words. I recorded and uploaded it on InsightTimer immediately on Dec 17th, which had a note:
All tracks submitted after Dec 16th will be published in mid January 2023. Happy holidays!
I was slightly disappointed that I had missed the submission cut-off by just a day but let go of any expectation. To my surprise, on Dec 21st Wednesday I received a notification that the meditations (I had created two) would go live on 24th December, today. What a timely gift, I thought. Busy with an urgent request that came in on the 22nd (again, something I knew I ‘just had to do’), I spent all of 22nd and 23rd translating and recording a meditation in Italian (which I do not usually do) while traveling to Grenoble, France, where we are spending Christmas with my husband Luca’s family.
I never planned to create this, or share this, especially not specifically today. But today, returning after breakfast & coffee, a strong impulse hit me, and I knew this story, this gift has to be shared, and now. And so, I sat down for the next 2 hours, to write this story, and with great gratitude, love and joy, to share this gift with you: Moving into Stillness Exploration and Meditation (practice) 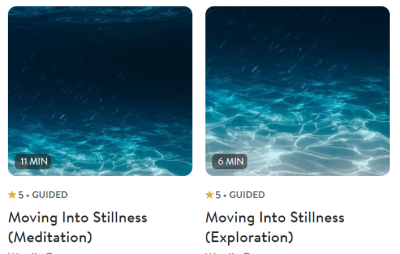 These words are Erich‘s, the the sounds Kevin MacLeod’s, not mine.
And the divine timing was thanks to the hardworking team of InsightTimer.
I was merely an agent, I merely let life pass through me, I did what I had to,
what I knew had to be done: Share this with the world.
This is one of the many times that, by surrendering to life, letting life pass through me, I have felt indescribable joy, peace and resonance.
💭 When was the last time you felt an impulse?
💭 And did you follow it? What unfolded?
💭 What gifts have come your way in 2022?

Wenlin Tan is a Women’s Well-being Coach, Qigong and Yoga specialist for women and Red School Menstruality Mentor who is passionate about supporting women to overcome overwhelm to find flow, ease and joy in their life. Wenlin brings with her over 15 years experience working across the fields of health, psychology and wellness, with over 3,000 hours of training & 7 years of coaching and teaching experience, helping clients across Asia and Europe. Ready to find flow and ease in your life? Book a women’s well-being coaching session with Wenlin.