Twin cinema is a poetic form written in two discrete columns. Each column can be read individually from top to bottom, often present correlating or contrasting images, or viewpoints at odds with each other. It’s beauty lies in its ability to be read also across. When done so, each poem tells a different story / reveals new meaning. The first twin cinema poem was created by Singaporean poet Yeow Kai Chai, entitled “Begone Dull Care”. Other noteable twin cinema poems include “For the End comes reaching” by Singaporean poet David Wong Hsien Ming, and “Singaporean Son” by visual storyteller Low Kian Seh. 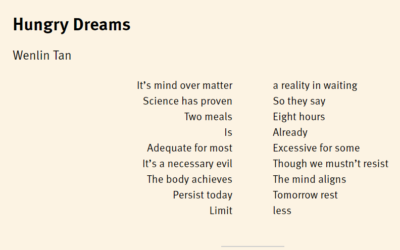 Romy and Mia from LOR Journal, approached me to work on a poetry bot as part of Emerging Writer’s Festival 2019. As a storyteller who works with visuals and text and takes joy in melding traditional and digital, I was thrilled. When it came to choosing the form, being a Singaporean and visual artist, the Twin Cinema poetic form was the clear choice. I decided to experiment by melding the form with the Haiku, which is simple yet profound, forming a hybrid.

I have to admit, the idea of making a poetry bot from scratch did seem daunting. Thankfully, there were already numerous existing bots like AccidentalHaiku and p0em_bot, and various pages with open source code for anyone to reference and use. Since I selected the twin cinema poetic form, I went through a slighty different process:

First, I selected various words, including a mix of the following:

Then, using Google Sheets, I set up a structure for these words, carefully selecting the placement of each type of word, taking into account the order, pairings and the syllable count (to ensure that each possible permutation would fit the 5-7-5 syllable structure of the Haiku).

To maintain the integrity of the visual form (ensuring the vertical aisle ( | ) between each row was aligned), images of each permutation/poem, generated via coding with the help of behavioural research Luca DellAnna, were used instead of typed text.

Lastly, to set up the scheduling of the bot so it would post a new permutation/poem routinely over the duration of the festival (19-29 June 2019), we used Integromat, which linked the images (stored in Google drive) to the Twitter account, which is live, here.  Some permutations below:

As an artist that often has a set idea of how I would like a finished piece to look/feel/sound, the hardest part was relinquishing control.  To allow the bot to have more freedom. I had to loosen the confines / boundaries for the bot, within which the beauty of randomness could be allowed to unfold organically. Though they’re far from perfect, I’m happy with the results – some permutations even have an almost poetic, human touch to them.

What do you think?  Feel like trying out the Twin cinema poetic form?

Want to make your own poetry bot? Write me!